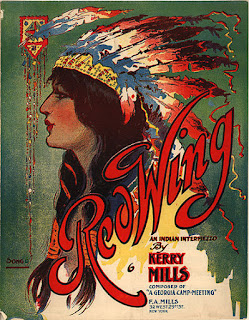 Eliot's Notes claims: "I do not know the origin of the ballad from which these lines are taken: it was reported to me from Sydney, Australia."

The origin is a popular song of 1907,  Red Wing. It was parodied and sung in various versions by soldiers during the Great War, including this humorous attack on Charlie Chaplin:

Now the moon shines bright on Charlie Chaplin
His shoes are cracking, for want of blacking
And his baggy khaki trousers still need mending
Before they send him to the Dardanelles.

The Australian version refers to a Sydney brothel-keeper:

Oh the moon shines bright on Mrs Porter
And on her daughter,
For she's a snorter;
O they wash their feet in soda water
And so they oughter,
To keep them clean.

There is a far more obscene version, but the reference to the ladies' feet may have suited Eliot, providing an allusion to Act 3 of Parsifal, in which the hero is baptised and has his feet washed by Kundry as a symbol of his purity.

The Waste Land: the text of TS Eliot's poem linked to illustrated annotations